Deemed as the ‘only Psychobilly Outlaws to come out of the Soviet Union’ Russia’s The Meantraitors return to Beijing two years after their first ever China tour in 2015. Part of the ever expanding network of rockabilly punk around the world, the band has been going strong for over twenty five years and they’re taking China by storm this time with a fifteen plus date tour of the country. It all kicks off at School Bar this Saturday, May 6th alongside Beijing’s own Rolling Bowling and up and comers Underdog. I chatted with frontman Stas Bogorad aka Boggie, as he prepared for his trip from St. Petersburg, about everything from their past trip to Beijing, punk’s relevance in history, and more.

It’s been two years since your last visit to China. And from the looks of it, you guys are going all in this tour with fourteen shows across the country. What made you want to come back? Any memorable stories from the previous trip?

The answer is we love China! The country is so great, so different to anything we have ever seen before. Last tour, we loved absolutely all: the clubs,

the people, the atmosphere, we loved having tonns of pix and videos at the gigs and in the cities, it was so amazing that we knew before we left that we

definitely will be back. The most memorable for us was to meet Rolling Bowling at the airport of Beijing, it was so cool to get their support and help

right in the beginning of our tour, this means a lot to us and we will never forget this. We also simply loved the performance of all Chineese bands, Rolling Bowling, The Psyders – those acts are great. A real hardcore memorable story was to meet a German Psychobilly guy, whom I met at our gig in Cologne in 1992 and didn’t see him since!

He is working in China for Volkswagen, so he came to Beijing to see us from the other Chinese city 1000 km away, it was a blast to meet him, we become close friends,

he even visited us in St.Petersburg and in Germany, during our Eurotour a year ago.

What’s the most common misconception about punk in Russia? Can you give us a viewpoint in what being a punk in Russia is like nowadays compared to when you started twenty five years ago?

Hard to explain, my opinion is punk all in all has to be 100% true. And it doesn’t really matter wether it’s Russia or China. There are too many untrue pop-punk bands around,

there are just a few true punk diehards. I want to name my favorite punk band The Exploited. We are old friends and we are their biggest fans. Wattie and Co is the big example of what punk rock is, what punk attitude is. My type of music is not a pure punk, it is Psychobilly, a mixture of Rockabilly and Punk. It is extreme punky rock’n’roll. I guess, it was much more honest to be a punk in 80’s or 90’s, it was more dangerous, definitely, I used to fight nearly every day just to defend myself from some drunk common people. I could have died a couple of times, I just was lucky. lol

You guys spend a lot of your time on the road, having lived in Germany in the late 90s and even just recently completing a whirlwind tour of Europe? And I imagine through your travels have seen the world develop quite a bit. What’s been the most noticeable change you’ve seen across Europe and the rest of the world?

Yes, we are touring a lot, trying to present ourselves everywhere around the world. We are pretty often in Europe, we even live in Europe as St.Petersburg is the most european city of Russia and it is just in an hour to drive from Estonia or Finland. So, sure, we have a huge Euro influence. Our type of music came from Europe, we are the first East European Psychobilly band and we thank European fans for their support. We spent many years in Cologne, a huge part of was completely illegal life without visa, without insurance, without a legal place to stay. We used to drive a car with illegal self modified plates for some months, we even joined very known German psychobilly band Mad Sin for their German tour in 1994, nobody but us knew that we and our car were 100% illegal…ha-ha! Yeah, it’s a long way to the top if you wanna rock’n’roll! I remember, we used to live at rehearsal room of my mate, he just gave me the key to rehearse, but we had to live over there for several months, it was in the cellar of some school, we had to leave that place pretty early not to get caught, but one day we slept too deep and got caught in the locked room, somebody wanted to open it with the key, while our key was in the lock on the other side. We didn’t give any sound, so those guys finally left, but we had a trouble with the owner guy later on, we had to leave the place. Many stories like that, buddy.

It’s been a while since Heavy Boogie, your last album was released – any plans for a new release in the future?

Sure, we already started to record the next album, we want to make it out this year. 7 songs from this album we already play live. We will continue our studio work right after the Chinese tour.

The world is a bit of a mess right now, though one could argue it’s always been and we’re just finally noticing the cracks – is punk more vital than ever now? What would be your advice to anyone starting a punk band anywhere in the world?

Yes, the world is completely sick, people are too deep in politics or religion, both things we do not like. We love rock’n roll and we hate war, we do not believe politicians, all we can do is to ignore them and to continue playing our insane music. Music is definitely a very vital thing for many, nowadays. But it still was decades ago. We started in 1989 and each new vinyl record or each tape meant as much as a treasure for us, Nowadays’ teenagers do not know what it’s like to search for some artist’s album for a year or two. Nowadays fans can really enjoy the situation, You can find nearly all in the internet. But nevertheless, true types of rock like punk, hardcore, psychobilly are extremely vital for many not to lose the sense of their life. Biggest problem in my opinion is alcohol and animal abuse. These 2 things multiply cruelty and make a whole world so sick and so lost. I am so happy to be a raw vegan for more then 3 years, I wish you to join vegan zone, it’s a right direction. I wish to all new punk bands to be far away from politics, it will make your music better and it will help you to avoid many problems. I also wish you to constantly rehearse, to push yourself to the limits, to be dedicated to your band. Just in this case you have a chance.

What’s the thing, whether it be a dish, a drink, or a place, you’re most looking forward to back here in China?

We simply miss all we saw at our concerts in China last time, we miss the cities, hi-tech railway stations, healthy food. We are hungry for China, see you bloody soon! 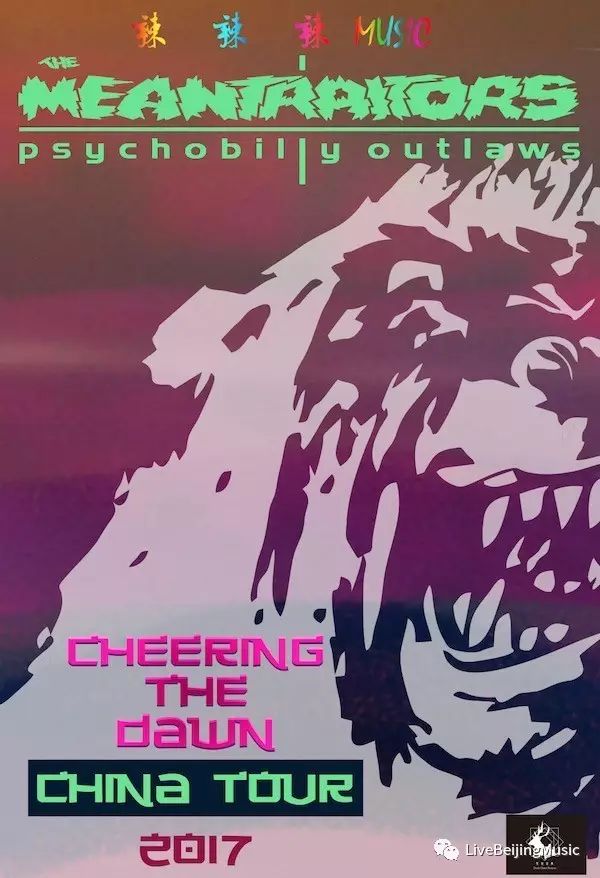 Friday May 11th –  Saturday May 13th to be confirmed ASAP

Hong Kong bittersweets via Chengdu, Russian psychobillies invading the Mainland, and Chinese rappers meeting one of the world’s top rappers – it’s the latest batch of music videos featuring Mosaic, The Meantraitors, Chacha, and IN3.