Life is made up of opportunities either seized or skipped over. From the minute – replying to a stranger’s message – to the astronomical – moving across the world on a whim. For Nocturnes, the electronic indie duo made up of Qinghai native Wei Du aka Leslie, who provides the deep melancholic vocals, and Ireland expat David Carey, who provides the airy ethereal guitar notes and composes all the music himself, their quick rise on the indie scene is made up these seized opportunities, both big and small, that landed them a record deal after just nine months on the scene, accumulating in their full length LP Lines Written in Code and a nation wide tour kicking off this week on March 31st at Yue Space (link below).

Their backgrounds couldn’t be more different. Originally from Qinghai, Leslie grew up in your typical ‘education first family’. “It was not musical at all.” Her parents were both teachers meaning that Leslie’s studies were priority number one. While Leslie notes that she most likely got her singing talent from her mother who would sing Chinese folk songs in her spare time, music was nowhere on her radar till university. The only silver lining when Leslie was accepted into Peking University much to the relief of her parents. Their hard work (i.e pressure) had paid off and she was able to live out her college years relatively stress-free, free to explore her own desires for once, including that nagging suspicion that she could very well sing. At the same time, across the world, David Carey was doing everything in his power to avoid a life of higher education. The Cork, Ireland resident paints his hometown in a similar light to China – they have both become first world countries in a short space of time…it’s very family-oriented and very much about what your parents want you to do”. Which of course, was becoming a doctor, “the job with the most prestige”. That was definitely not ideal for David (least of all since the sight of blood makes David Carey faint). So when filling in his CAO (an application in which you choose your course, all of which have approximate points required in a future exam to get in) David made a last minute change and put music as his top choice, and would eventually his family that he didn’t receive high enough marks to pursue medicine. The first of many deviant moments that would lead David to China.

Meanwhile, at Peking University, Leslie’s curiosity won the better of her and she decided to give singing a chance, auctioning for a cover band looking for a lead singer (the winning song: ‘What’s Going On’ by Four Non-Blondes). It wasn’t exactly to her liking – the band mostly stuck to tired classics – “Lots of Guns N’ Roses,” she half-heartedly recalls. Nevertheless, the experience was a positive one – “it gave me confidence…to find a serious band,” a desire that would eventually lead her to David.

David spent his university days honing his guitar skills more so than attending class, but knew deep down, he wanted to pursue music as a career. And while China isn’t the first place one goes to start a band, David points there was a lot more to the decision: “I had always wanted to travel to China…the history and that aspect of it always interested me”. After some online exploring, David Carey stumbled upon the CRI Program ‘The Sound Stage’ (RIP) which gave David an introductory course to the music scene in Beijing and all but convinced him to jump on a plane with his girlfriend at the time. David explains, “We had a band together called Palaces, that did very bland indie rock, and I loved it, in the six months I was here, and she hated it”. Not only that, “She very quickly went from wanting to do music for a career to not wanting to do music in any way at all”. Whilst most people, particularly first-time expats to China, would throw in the towel, David instead doubled down and a month before going home posted an ad in “very broken Chinese” on the music platform douban, “to see if there was anyone out there interested in creating music with me”.

By the time David’s message made its way to Leslie, he had already passed over numerous singers whose high-pitched Mandopop stylings were a far cry from what David had envisioned. But Leslie, who’s deep soulful voice stood out from the rest. “She was the one that had the most unique voice,” David recalls. The feeling was mutual Leslie says: “The second I heard David’s demo I just got this feeling instantly and just starting writing down words”. The two started a fruitful correspondence immediately. “We were sort of making songs together as strangers – I’d send stuff to her, she’d record on her phone and send it back to me.” Those first two singles ‘The End of Nightmares’ and ‘Big Words’ would end up being on their self-released debut EP A World Full of Adults. “It helped straight away that we weren’t coming into this with overlapping roles” David remarks. “We were both strong in the areas of each other’s weaknesses.” Before David headed back to Ireland the two went to Pilot Studios in Chaoyangmen played and recorded together for the first time. It took over six months for David to return but from there it was to the races, one gig after another, as the two slowly worked on their stage presence whilst being inspired by the budding local music scene around them – including indie rock outfits Da Bang and Glow Curve. Playing live proved to be more difficult than putting together the music: “It took a while to figure out how to make it sound good (live)…we were using just a head phone jack cable, balancing one track. Now we have six tracks running simultaneously.” Nevertheless, the duo plowed forward and continued to write. While David preferred to lock himself away, meticulously working on the composition of each song, Leslie, whose keen ear for melody her bandmate still envies, would find time in her daily life, working for a PR company, to come up with lyrics – “Most of my lyrics came to me during my meetings with clients.” The more she hated it the more she would get lost in her head escaping the boredom and draining routines of young adulthood. It was cathartic for her. When the two were ready to put in the final touches on their second EP Dust into Glory, they got in touch with me and asked if I could put them in touch with someone who could master it. After relaying them to Shen Lijia, who runs Ran Music and does quite a bit of mixing for bands and producers all across China, the EP eventually made its way into the hands of someone at Cao Tai Music, a prominent label, and the rest was history.

Between their signing in the fall of 2016, the duo have been expanding their sound and reaching larger audiences, particularly young Chinese. Their second single off their LP – ‘Echoes’ – has close to eight hundred thousand listens at the moment, while a music video cover of fellow Beijing band Future Orient’s ‘Running’ has over seven and a half million views, which David notes is twice the population of the country he comes from. “I thought that if I were ever to have a video with that many views it would feel amazing, but it really doesn’t feel that special, they’re just numbers on a screen”. The band gets a lot more out of playing with their idols like Da Bang, a geek-heavy moment that the band holds highly, moving up from the supporting act slot to headliner, and the fans who come out. “The other day we had a fan send us some artwork they had made for us”. Clearly, a sign that Nocturnes are striking a chord with their growing fanbase, who perhaps see a bit of themselves in the ‘silent heartbreak, missed opportunities, and realities that might have been’ that shape their sensual concoction of haunting vocals, impeccably groomed arrangements, and nuanced piano chords. And yet, it was exactly those breaks and seized opportunities that have led the David and Leslie to where they are today on the eve of their ten-city tour. Funny how that works. 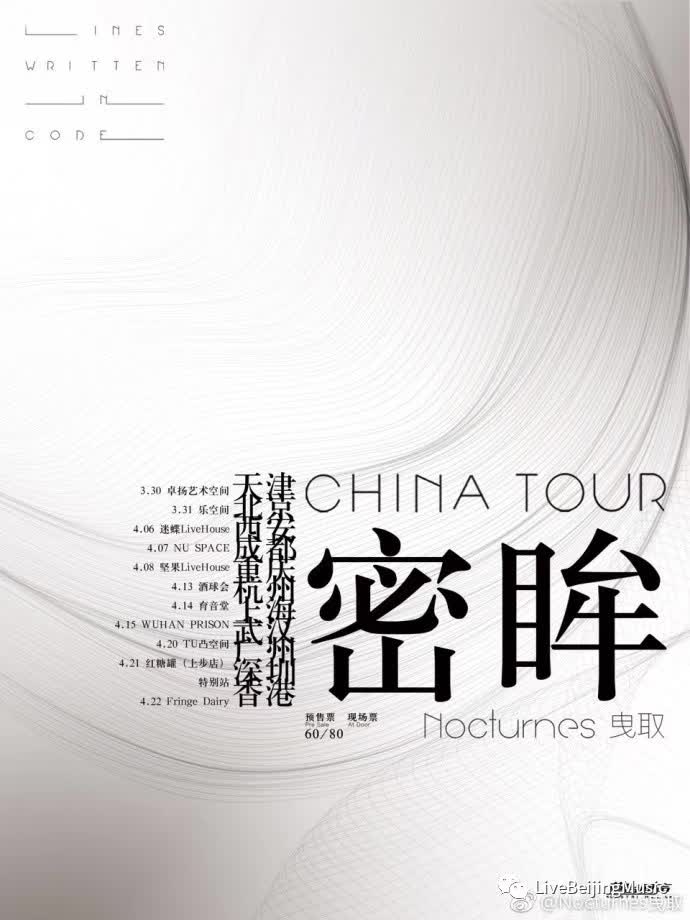 Dance music collides with traditional music, an airy indietronic debut, a frequency junkie’s delight, and some more post-emo rock to get nostalgic about – it’s the latest releases to storm our headspace including new takes […]

Another six-band lineup over the weekend – and gotta say – it’s a bit exhausting. Pretty much five straight hours of bands, in the dingy walls of Tango (a venue that’s equally overrated and underrated). This is […]

Beijing in full force as we wrap up some of 2017’s late entries including debuts from post rock outfit She Never Sings Our Songs, indietronic duo Nocturnes, as well as the latest from indie rock […]